That's the original 29-5, aka 'The Bomb', supplying water. It was a homebuilt on a 1957 Chevy chassis. The tank was a government surplus fuel tank. It went into service prematurely during a crash on Rt 13 of a gas tanker. Rt 13 was closed in both directions and water was hauled from the old cannery in St Georges by just about every truck that was around. 29-5 was used on scene as a reservoir. 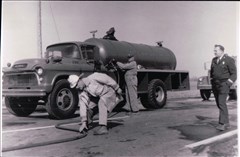